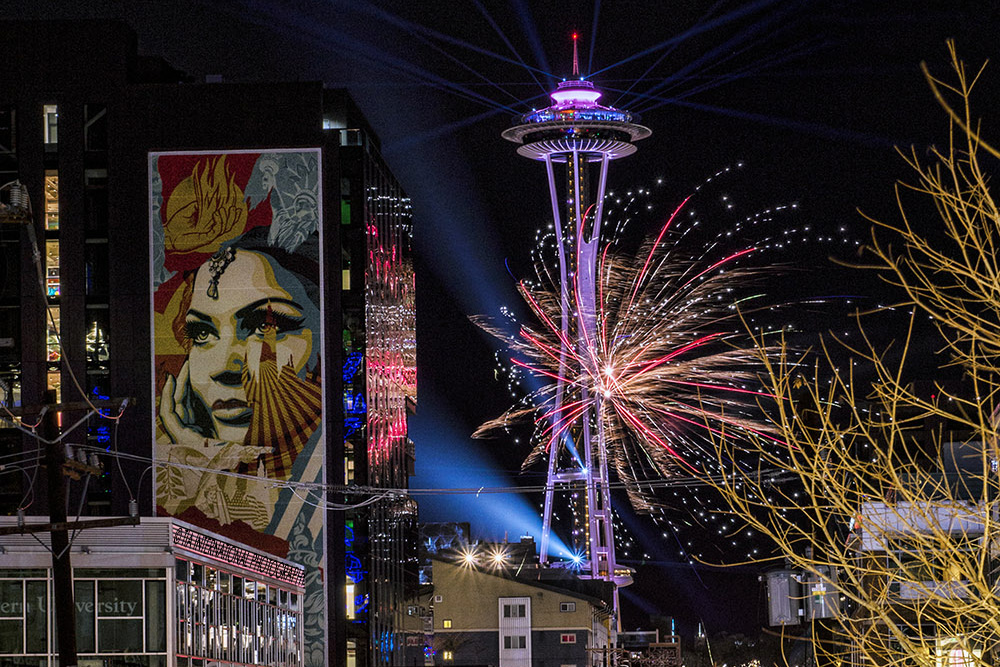 At the time of this writing, the new decade is still in its infancy of 39 hours and 15 minutes. There is still a subtle but simmering consternation (and controversy) around Seattle and the Puget Sound Region regarding why the annual New Year’s fireworks show, hosted by the Space Needle and T-Mobile, was canceled without rescheduling. As a result, hundreds, if not thousands, of people traveled to Seattle Center and its immediate vicinity only to be left in bewilderment and disappointment.

At the same time, this image that I captured below, caused many people on Instagram to ask me what actually happened. How did I still come away with an image that suggests a fireworks show to commemorate Seattle’s entry into the 2020s occurred?

To be clear, there was no show. Three firecrackers went off a minute or two after midnight and that was it. I was fortunate enough to capture one of them. However, the question of how, given the image (which has now become my favorite among all my Seattle New Year’s fireworks images), is a legitimate one that one can briefly investigate. My hypothesis is that my photograph and the “New Year’s celebration that wasn’t actually celebrated” were a result of four factors:

By New Year’s Eve Eve (Monday, December 30th), the rumours and rumblings of a cancellation had already spread around the city. Wind advisories had already forewarned that there was the possibility that the annual fireworks show could be canceled due to abnormally high gusts of wind that could make the fireworks hazardous to launch and execute. In other words, this was a critical safety issue that couldn’t be risked to please a crowd, even if it was the turn of the decade.

In retrospect, I think what most people did not understand was the winds themselves were in reference to those racing against the height of the Space Needle (605 feet), not necessarily the wind racing at ground level, which appeared — almost anyone would tell you who was present — calm to the point of nonexistent. On ground level, where most human beings were located on New Year’s Eve, high winds did not appear to be an issue whatsoever, so why was the show canceled? This was definitely a widespread misunderstanding in communication and interpretation that led to a lot of public confusion in the wee, early hours of 2020.

Every few days before New Year’s, if I know I will spend the holiday in Seattle, I make a point to scout the city. I literally hop into my car with my photography gear in tow, and drive around the city for different vantages of the Space Needle, from which the pyrotechnics would be launched. I take sample photos of the areas that I consider to be contenders.

Part of the reason I do this was on account of what took place on New Year’s Eve 2008 (December 31, 2008). I had visited Kerry Park to capture the fireworks. This was such a mistake on my part. I was still a relatively new resident in Seattle and I thought Kerry Park was an obvious spot to capture the show. Though this was true, what I hadn’t anticipated were the hundreds of very, very merry revelers lounging around, many of whom thought nothing of bumping into my tripod and camera multiple times, both of which almost toppled over the stone boundary on two occasions that night. Many of these folks were drunk, or shouting obscene remarks in their intoxication, so they didn’t really care or think about what they were doing among the crowds of people. As midnight drew nearer, I found these interactions agitating and increasingly irascible — to the point that I just wanted midnight to arrive so I could photograph the 10-minute program (for which I had already waited two hours in the drizzly conditions that night) and get back home.

I made a vow on January 1, 2009, that I would never return to Kerry Park to photograph the New Year’s fireworks ever again, and I have kept that promise. It wasn’t about the rowdy people, per se, but their propensity to disrupt and interfere with what I was trying to achieve, which I only get 10 to 12 minutes a year to accomplish — and that’s it until next year. Below are some of the photos I have captured of the fireworks between 2009 and 2020 in Seattle. The only years I missed in Seattle were 2011 (I was in Philadelphia) and 2014 (I was in Sydney).

On December 30, 2019, after performing my annual scouting, I had decided on three locations that would be the final contenders, but the one that beckoned me (rather seductively) was this location below, in the South Lake Union district of Seattle. I had already contemplated in my mind what this urban landscape would look like with pyrotechnics illuminating the night skies. My imagination was running on overdrive. This was the spot for 2020.

Below is a trail of communications that came from the Space Needle’s twitter account on New Year’s Eve. They are listed in chronological order. You can see how the situation deteriorated with each tweet. Speaking of deterioration, you can click on the different tweets and read some of the responses to the Space Needle’s announcements. Few of them were sympathetic. Some were indifferent. Some were hilarious. Several others were, in true social media style seen in Twitter daily, far from civil or cordial. I shudder just thinking about some of those remarks.

Eventually, the Space Needle issued an official press release about the cancellation:

Funnily enough, as I think about this event retrospectively, some conditions of New Year’s Eve 2019 (December 31, 2019) were reminiscent of Kerry Park exactly 11 years prior. There were not that many merry revelers this time around, but there were a higher number of people than I expected, and many of them did not seem to care that they were infringing on my composition by standing directly in front of me and my camera. Interestingly enough, the people who took pictures with their cellphones were not the biggest culprits. The biggest offenders, in fact, were the two or three couples who came to the area and set up their tripods and gear in front of me. I had already arrived in my chosen spot two hours before midnight (seen in Factor #2 from my scouting mission — the blue car is mine; I was incredibly fortunate the same space was available on New Year’s Eve).

I won’t bore you with the typical details. We all know how people can be in crowds and not even be aware that they are inconveniencing others or being dismissive or oblivious. When I had to shift my position a number of times on Thomas Street, causing me to have to recompose the frame of my image each time (photographers know this can be stress-inducing with a looming deadline), I started to stare at my car which was right behind me, not because I wanted to leave. On the contrary, I was thinking creatively about how it could be useful to me for other reasons than transportation under the current circumstances. I didn’t have much time as midnight approached and the area became congested with more people and vehicles trying to find parking spaces.

I began to contemplate my options because my exasperation was starting to grab hold, and I didn’t want that emotion while photographing. I remembered my car had a convertible sunroof, one that I rarely ever used in my eight years of ownership. Like classic cartoon characters we’ve come to love since childhood, an imaginary light bulb lit in my head.

In order to minimize the number of people who appeared in the final image for “Seattle Welcomes the Year 2020”, I entered my vehicle, opened the sunroof for the first time in years, and set up my tripod on the driver and passenger seats, as well as the back seats. I stood up from the back seats, poked my head and upper body through the sunroof, and attached Ananda (my camera) to the tripod. At this vantage, I had some considerable height above the street level where people continued to gather. This solved a lot of challenges, especially the issue of recomposing the frame of the final image. The eventual result is the image that has generated this blog article.

Even though Seattle’s New Year’s fireworks celebration was canceled due to high winds above the Space Needle (much to the widespread disappointment and brutal consternation of people who had come to see the show), I was still able to come away with this gem.

This was *literally* one of three firecrackers that ignited during the first or second minute after midnight, and then the show was over. In retrospect, I can understand why the show was terminated. I can honestly say the Space Needle fireworks planners, the City’s Fire Marshall, and all the meteorologists were not joking about the high winds around the Needle, even if we didn’t experience them at ground level.

You can actually see the direction of the winds by the trails of the firecracker tracking to the right (to the north) instead of trailing upwards like the normal trajectory of a firecracker. I liken this to an umbrella. Typically, the umbrella is upright, covering you while you walk, but when it gets too windy, the umbrella can flail to the side. That was what was happening here, and that is what I had captured — the firecracker was flailing sideways, which is not a good indicator for having a show with hundreds of people and nearby houses and residences. Initially, the show had been delayed until 2am (which really angered a lot of people), and when that time came (yes, I stayed and waited because that’s how I do as a photographer on a mission!), it was canceled altogether as discussed in Factor #3.

Regardless, I really like how the final image came out, which wasn’t too far off from what my mind had concocted the night before. I’m lucky to have come away with *something* to document the occasion. I still suspect Seattle’s entry into the 2020s will be remembered with notoriety instead of nostalgia given the way events transpired. I think it is part of what makes Seattle and its people very unique and extraordinary (in an endearing way, of course). The New Year’s event this year will always be a point of contention and discussion. I surmise that we will make up for this in 2021.

One of my contacts on Instagram, in response to my brief description of the story behind the photo stated, appropriately, “What a perfect photo for imperfect circumstances.”