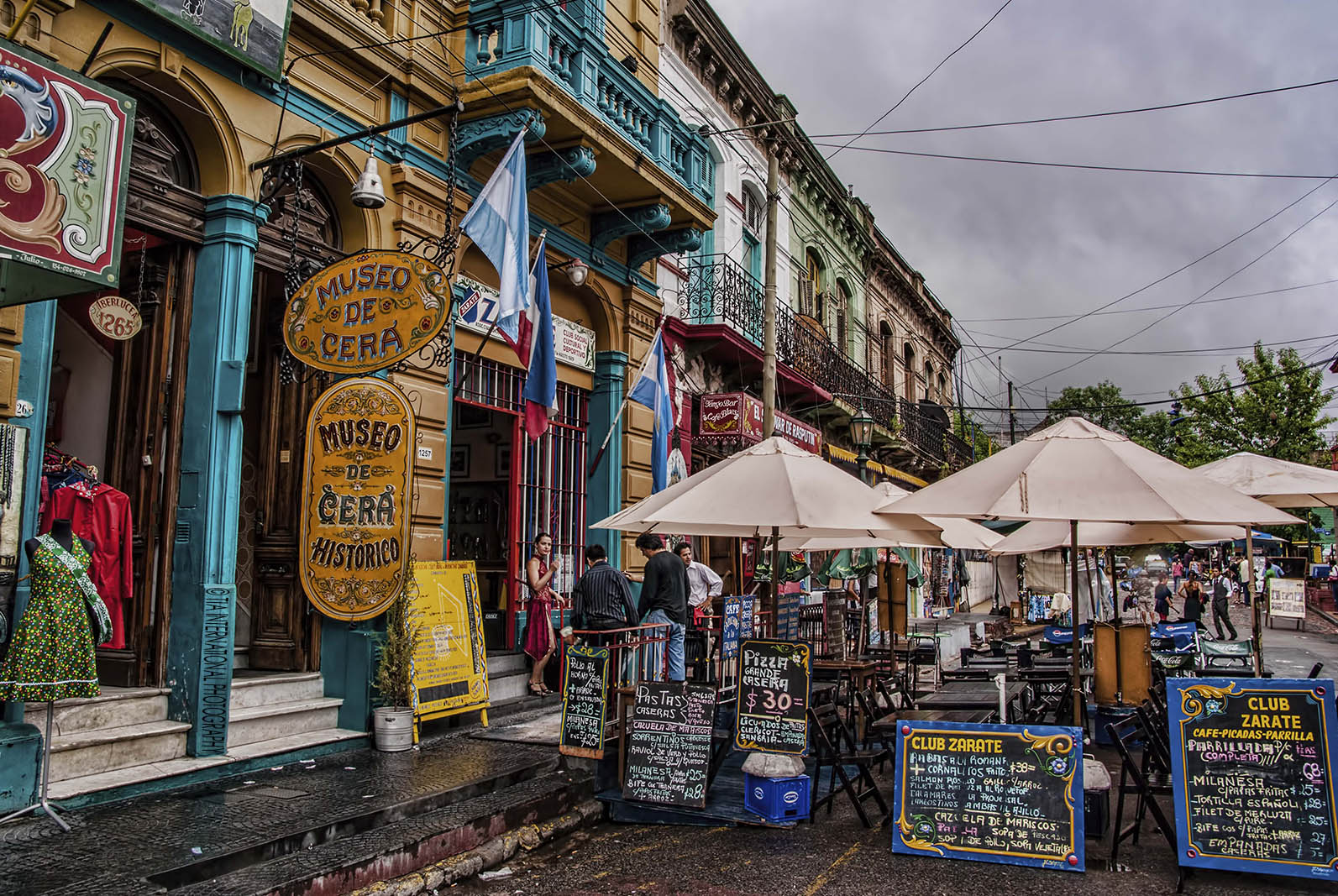 My first article about Buenos Aires is a story I’ve wanted to share for some time, but I have never taken enough time to think about and compose properly. As a preliminary disclaimer, I would like to say that I very much enjoyed by first trip to Argentina back in February 2010. However, I can never forget that the first 24 hours there were so indelible because they were so abominably unpleasant. Regardless, I would still like to share the tale. . .

Come Hell High in the Air

The day I arrived in Buenos Aires (BA) was frightfully stormy and volatile. To be more precise, the few hours before we arrived in Buenos Aires had been stormy and volatile. The final 60 minutes of the 10-hour direct flight from Houston was the literal embodiment of full-on, bona fide turbulence. We’re talking about a commercial airplane’s several random dips of 200 feet or 300 feet at different times as we approached Ezeiza International Airport. There were several passengers on our plane, including little kids squealing and senior citizens groaning. Many of them had also resolved to making repeated use of their airbags, so the sounds inside the plane were commensurate with the level of turbulence that was essentially throttling the plane.

The combination of the awful, nauseous feeling one experiences when a plane dips suddenly in elevation due to turbulence, and my neighbor voraciously reciting the Rosary, did lead me to think, for several dark minutes, that we were not going to make it to BA. The entire scenario was terrible, intense, and miserable. Our lives were literally in the hands of the pilots who could not provide updates because they had a plane to steer against what I could only hypothesize was Mother Nature’s unforgiving, merciless, and brutal wrath. I had never been so terrified to be on a plane in my entire life until that point.

The approach to BA’s airport turned out to be utterly futile. If we were in a science-fiction novel or television series, I would have opined that the turbulence and winds served as a violent barrier that deliberately prohibited aircraft from entering the city. The nasty weather and furious winds were so unviable that the pilots announced that they were diverting the plane. They had decided, for everyone’s safety and sanity, to immediately exit Argentine airspace and make an emergency landing across the large bay of Rio de La Plata and land at Carrasco International Airport in Montevideo, Uruguay.

Thankfully, after failing the battle between mankind and Mother Nature (the victor of which is always the latter), our pilots used extremely good judgement and we avoided the worst. The relief of leaving BA airspace and finally landing on the ground in Montevideo was such a welcome relief for everyone on board. Since that day, I swore I would never marginalize, disrespect, or belittle the work of a commercial airline pilot. I have maintained that oath and do not anticipate ever veering from it.

After much protest from the passengers for close to 90 minutes, the pilots stated we could not leave the plane and sail across the river to BA, as that was not an uncommon mode of transportation between the two South American capitals. We did eventually arrive in Buenos Aires, roughly four hours after the originally scheduled time. It was still quite stormy but, believe it or not, I was determined to still go out that same night with my camera and tripod to document the scene.

The cityscape above features part of BA’s financial district along Rio de La Plata, which is truly more of a gigantic body of water (like an expansive sea) than a river. I took this photo ten minutes prior to the pending thunderstorms that eventually unleashed a very torrential rainfall throughout the night.

It is virtually the heart of Argentine history. For the past 200 years, Plaza de Mayo has been the epicenter of celebration, protests, and demonstrations of the people by the people. Many of Argentina’s great leaders and icons, including Juan Peron, Evita Peron, Maradona (just to provide three names) have delivered speeches to the city of Buenos Aires at Plaza de Mayo.

Even Madonna, when she played the title role of “Evita” in the mid-1990s, filmed several parts of the movie, and the music video for her cover of “Don’t Cry for Me Argentina”, at Plaza de Mayo.

The Plaza itself is strikingly beautiful and surrounded by multitudes of different architecture. The history of Argentina is embodied here, and it’s a visceral sensation when one is there. It is one of the places that you must visit when you say you’re traveling to BA. I remember that it was a gorgeous day too — the perfect place to frolic and be joyful. I was so happy to be there creating images. Perhaps I was too happy…

Alas, Plaza de Mayo was also where I had the ill misfortune of being pick-pocketed. At least, that’s where my family believed I was pickpocketed. It could have happened on the way there via el subte (the subway).

Despite the fact that I was surrounded by three members of my family for the majority of the day, we estimated my wallet was stolen within a 10-minute span — sometime between leaving a very packed subway train and being distracted when I was on my own for only 20 seconds at the Plaza with a fellow who had asked me about my lens. Not my camera, mind you — my lens, specifically. He had asked me, quite eerily, whether I was “happy” with it. The exchange was very odd, even though I was naively responsive.

To make matters worse, I made the abysmally poor choice of exchanging all my dollars to pesos that morning — and carrying the total sum with me. My biggest losses were the cash, my debit card, and my driver’s license. These items were stolen from the knee pocket of my cargo pants.

Then another source of severe anxiety struck me.

I had placed my passport directly underneath my wallet. Foreigners were mandated to carry this form of identification when traveling in Argentina. Fortunately — thank goodness — my passport was still in my pocket. Nevertheless, I was still very much mentally struggling with the baffling sensation of the consternation that had overwhelmed my mind as I registered what had just happened. I was trying to purchase a souvenir at the stand you see in the photo above and, yet, I couldn’t produce the wallet that I could have sworn I had put in my knee pocket and felt just moments earlier. HOW and WHEN the culprits dared to approach my person and steal my wallet will forever confound me. To this day, I still do not know quite how they did it, especially when I was not by myself the entire time.

My sister observed that with Alphonso (my first Sony dSLR camera, an Alpha 100) in my hands and my huge backpack containing my camera gear, among people with point-and-shoots, not only did I look like the only “professional” at the Plaza that afternoon, but I was also the easiest target. In the eyes of the thugs who wore the same clothing as the rest of the people to blend in, I’m sure I stood out quite easily simply because of the gear I carried openly.

We immediately returned to our hotel. The front desk representatives acted quickly to call my bank in the States. That resulted in the automatic cancellation of my debit card. Oddly enough, when my father told the concierge what had happened to me, the concierge didn’t blink an eye. His first response was, “Ah, I see. . .Plaza de Mayo?” My father was surprised, and I felt so embarrassed because I could tell that I was not, by any means, a rare case. I was just the latest case, and a common one at that.

The concierge apologized, in earnest, and said that Buenos Aires was full of “modern day gangsters” who were unarmed, but so skilled in pick-pocketing that it could be considered an art form. I had, unfortunately, just become the latest statistic in petty theft. It’s likely the thieves took my cash and threw my wallet in the garbage, as nothing else in it would have been of any sensible use or value to them.

Bare in mind that this event happened less than 24 hours after wondering whether we were going to make it to Buenos Aires alive.

My vacation in Argentina had commenced quite roughly, to say the least.

A pigeon even pooped on my leg at an outdoor cafe on my sixth day there! Considering all that had transpired already, I had to laugh when that happened. Aaah, Buenos Aires. . .

In retrospect, I don’t complain about what took place. I was fortunate that neither my passport nor camera were ever stolen, and that the theft wasn’t violent. Chances are, two or more people were involved in the heist. Nevertheless — bar the Plaza de Mayo episode and the frightful flight on arrival — the entire time in Argentina was truly a delight! I have the photographs to prove this!

The day after the pick-pocketing episode, I used the following morning to retrace all my steps to see, if at all possible, whether I had misplaced my wallet in one of the locations we had visited. I mean this literally. I woke up early in the morning, left the hotel, and went along the same path we had followed the day before, including stops at the restaurants and shops we had visited. It was my final effort to make sure I had covered all bases before fully accepting that I was a statistic, which was confirmed after 90 minutes. Instinctively, I knew this, but I didn’t want to ask “What if?” for the remainder of my stay in Argentina.

Upon confirmation, it was time to move on and enjoy a new day in Buenos Aires. The air was cool. The wind was breezy. The sun was hidden by the clouds, so it was not balmy or terribly humid yet. It was just pleasant to be outdoors. My family was still asleep, so I took advantage of taking to the streets with my camera. Sometimes walking through a city is really the best way to get to know the place and its personality. I made my way down Avenida Santa Fe for several blocks, passing through a few of the neighborhoods. I had to stop when I got to Palermo, a fancy neighborhood of Buenos Aires that, had I gone farther, would have required serious dedication and several more hours to explore, like La Boca from another day of my visit.

The image above depicts one of the street scenes I walked through that morning. It reminded me so much of New York, given the advertisements and the grittiness of the sidewalk and subway entrance of Estacion Palermo (Palermo Station) on Linea D (the D Line), or the Green Line.

I think this will be a good place to conclude this chapter describing my first 24 hours in Buenos Aires. I have other (much happier and intriguing) stories to tell that I’ll save for future blog articles.